My summary of the OpenStack Virtual_PTG July 2020

From the good things team mentioned that migration of the networking-ovn driver to the core neutron went well. Also our CI stability improves in the last cycle. Another good thing was that we implemented all required in this cycle community goals and we even migrated almost all jobs to Zuul v3 syntax already. Not so good was progress on some important Blueprints, like adoptoion of the new engine facade. The other thing mentioned here was activity in the stadium projects and in the neutron-lib.

Support for the new oslo.policy

Akihiro and Miguel volunteered to work on this in the Victoria if they will have some cycles. It is important feature from the Keystone team’s point of view. Keystone and Nova teams already have some experience on that transition so they can help us with that. We need to ensure that new policies in neutron can works fine with e.g. old ones defined in the stadium projects.

We discussed how to finish this adoption of new enginefacade in Neutron in Victoria cycle. There is couple of people who volunteered to help with that. After it will be done in Neutron we need to check what changes are required in the stadium projects too.

Rodolfo raised this issue that in some places we may still have e.g. only tenant_id and miss project_id. We should all be aware of that and whenever we see something like that e.g. in neutron, neutron-lib, tempest or other repos, we should propose patch to change that.

We found out that the only blocker which prevents us to EOL python-neutronclient as a CLI tool is lack of possibility to pass custom arguments to the commands. As we know, OSC/SDK team don’t have anything against adding support for that in OSC. It’s actually already done for e.g. Glance. Slaweq volunteered to work on it this cycle and if that will be done, define final date of EOL for python-neutronclient for Victoria+2 cycle.

We reviewed about 10 old, stagnant RFEs. We decicded to close some of them as non relevant anymore. For others we discussed some details and we will continue this discussion on LP and on the drivers meetings.

We needed to review list of stadium projects again. Conclusions are:

During this call Neutron-interconnection project was mentioned. For now it was moved to unofficial projects namespace but maybe someone will revive this project if there is use case for it. We talked about RFE and doing it in Victoria cycle. After discussions about the same with Nova team on Friday (see below) we decided that as a first step Nova will work on changes on their side and those changes will not require anything from the Neutron. On our side, Miguel Lavalle volunteered tentatively that he can work on this on too. There was also question about support of IEEE 1588 (PTP) in Neutron - so far we don’t have any support for it. But we are always welcome for new RFEs :)

List of gaps between ML2/OVS and ML2/OVN backends is in the doc. We discussed how to maintain this list and make it smaller. Decision from this discussion is that we will try to remember to add new items to this list every time when some new feature will be added to Neutron and implemented in ML2/OVS. We will also open LP for such things to keep it tracked on OVN driver side and to implement that when it will be needed by community.

During this discussion we talked about Neutron agents API and two options in it:

Conclusion from this discussion is that there is need and use cases (DPDK, telco) to introduce stateless security groups in openvswitch and ovn firewall drivers. During the discussion we agreed that implementation shouldn’t be really thought. Bernard volunteered to open LP to track it for both of those drivers.

Maciek explained us limitations in current implementation of segments in Neutron and how it blocks OVN driver to support that. Basically the problem is that currently Neutron has limitation that one port can be only on one segment. OVN driver is using “special” ports (local ports in OVN) to handle metadata and dhcp. And such port has to have IP address from all segments which belongs to the network. We agreed to introduce new type of device_owner which will mean that port is “distributed”. Such kind of port may then be in more than one segment at same time. Basically this concept is similar to how DVR router ports works currently.

Switching default backend in Devstack to be OVN

At the end of the day we discussed possibility to switch Devstack’s default backend in Neutron to be OVN instead of OVS agent. We all agreed that this is big step forward and that we want to do that as Neutron team. We want to give with this change clear signal that we believe that OVN backend is future of the Neutron and we want to invest more in that. Hovewer we want to highlight that this means nothing for real production environments. We are not going to deprecate any backends. All existing drivers will be tested as they are tested now in the Neutron gate. Different deployment tools may still use different backends as default ones. This change will be however pretty big change for all OpenStack projects which will use OVN driver as Neutron’s backend in their jobs. Such change was already done in TripleO in Stein cycle and it went pretty smooth so we are not expecting any serious issues there. We would like to do this change which we set for ourselves is Victoria-2 milestone.

It seems after discussion that this config option was introduced very long time ago and was probably related to something like descibed in the bug but later Open vSwitch introduced patch ports and there was another old LP bug which was saying that ovs-agent should use patch ports instead of veth pairs. And that solution is still recommended today in the Neutron. So we agreed to deprecate this option in the Victoria cycle and remove it completly in W cycle.

Service plugin called “loki” is developed to be use in the CI jobs and to add DB deadlock errors to some random DB queries. But for now it’s not used at all in the Neutron CI. During the discussion we decided to add new periodic Zuul job which will run neutron-tempest-plugin.api tests with enabled loki service plugin to check if Neutron still can handle properly such random DB Deadlocks.

We were discussion couple of different issues related to the neutron-lib in general.

This was long (2h) session where we discussed couple of important things.

During the discussion Sean Collins explained us that originally this new module was created as an attempt to refactor old module, and to make Neutron in the Devstack better to maintain. But now we see that this process failed as new module isn’t still used and we don’t have any cycles to work on it. So our final conclusion is to “undeprecate” old “lib/neutron-legacy” and get rid of the new module.

Currently we are running all Neutron OVN related jobs with OVN installed from packages provided by operating system. Maciek explained us why we should also test it with OVN from master branch. It is like that because often new features added to the OVN driver in Neutron are really dependent on changes in the OVN project. And until such changes in OVN aren’t really released we can’t test if Neutron OVN changes really works with new OVN code as they should. So we deviced to change “neutron-ovn-tempest-full-multinode-ovs-master” that it will also install OVN from the source.

During discussion about our CI jobs we decided to remove from the Neutron check queue 2 non-voting and still not stable jobs: “neutron-tempest-plugin-dvr-multinode-scenario” and “neutron-tempest-dvr-ha-multinode-full” and move those jobs to the experimental queue. This is temporary solution until we will fix those 2 jobs finally.

It wasn’t as great as in other PTGs. But here are our team photos in the current context: 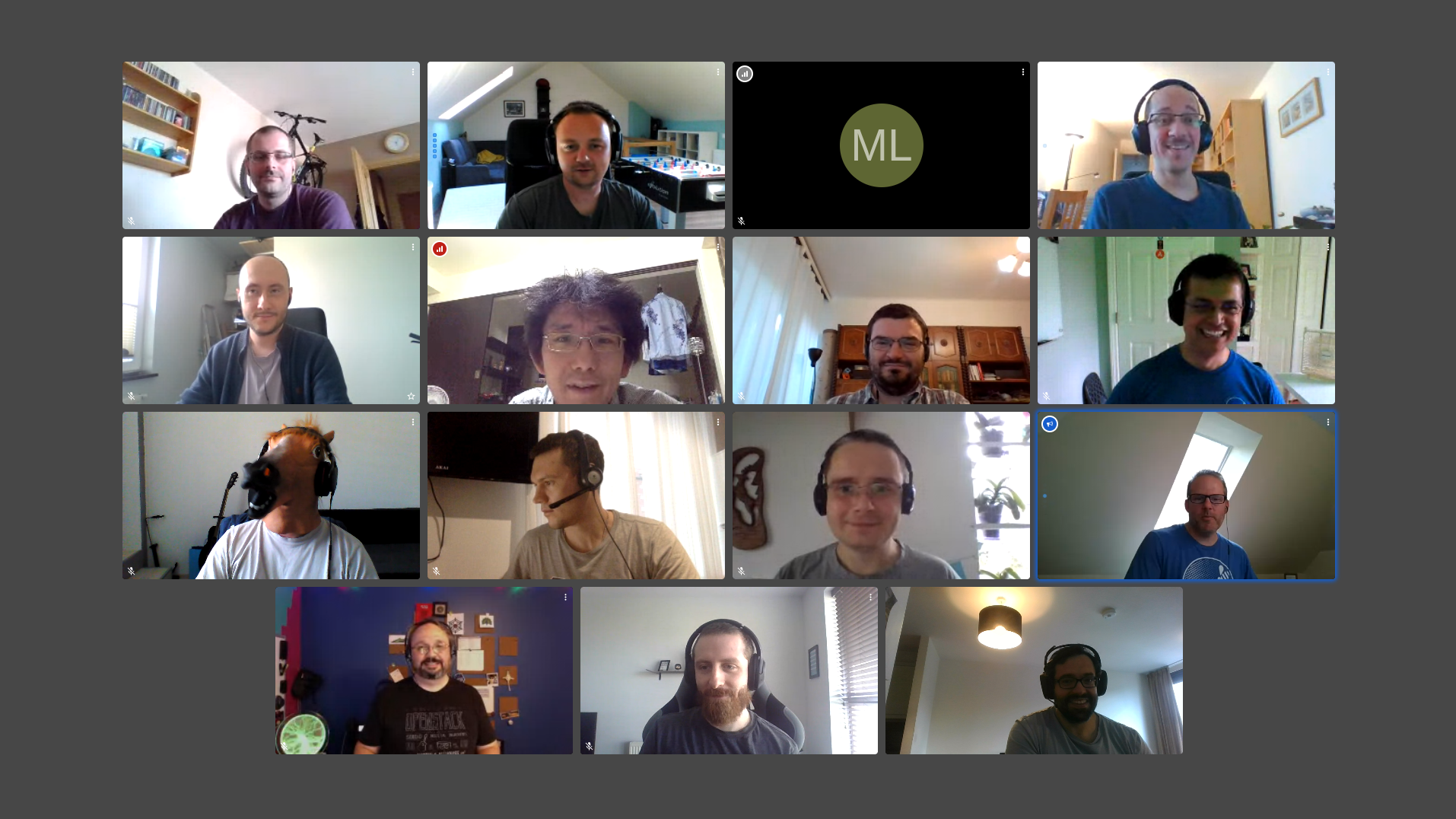 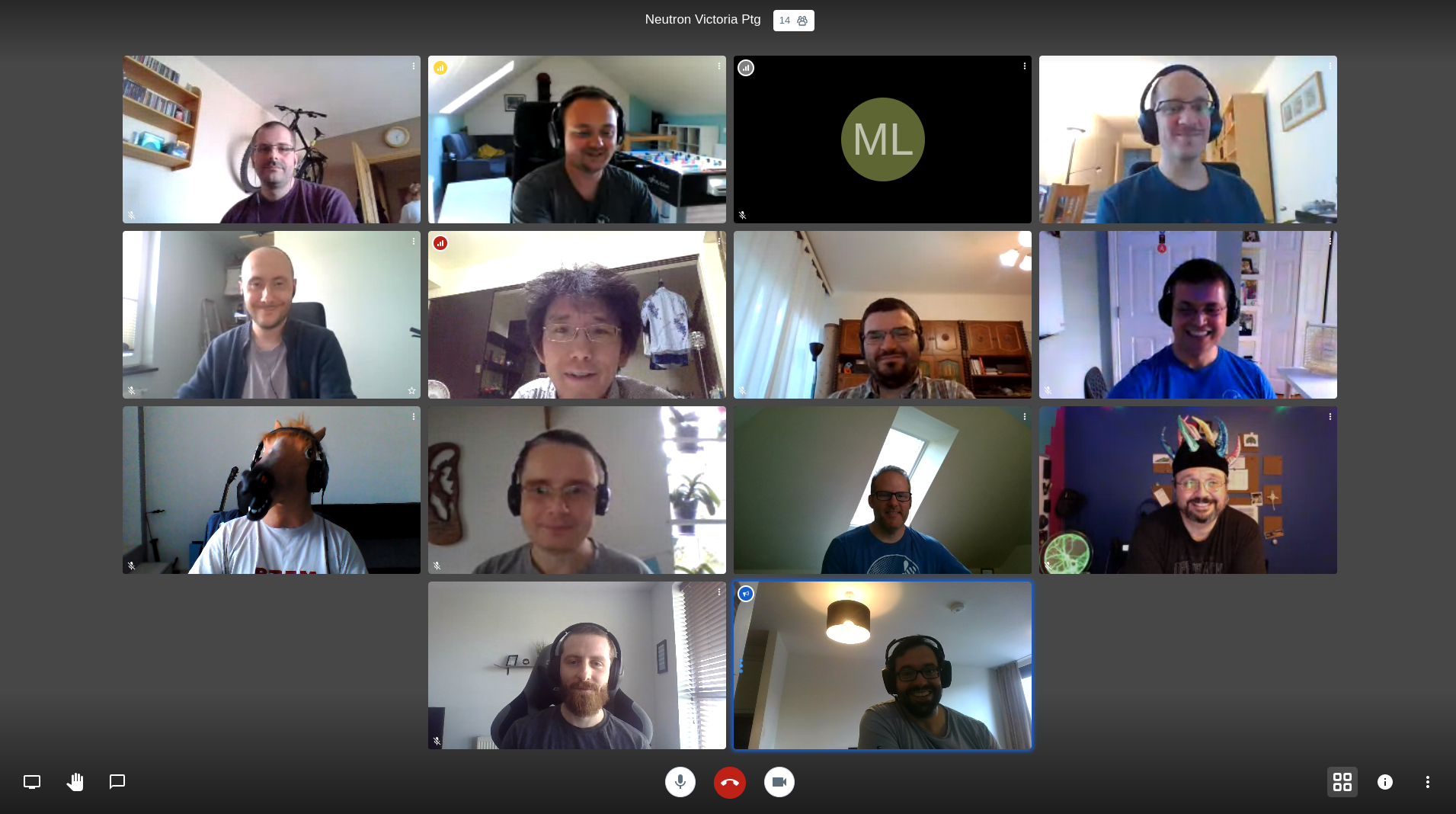 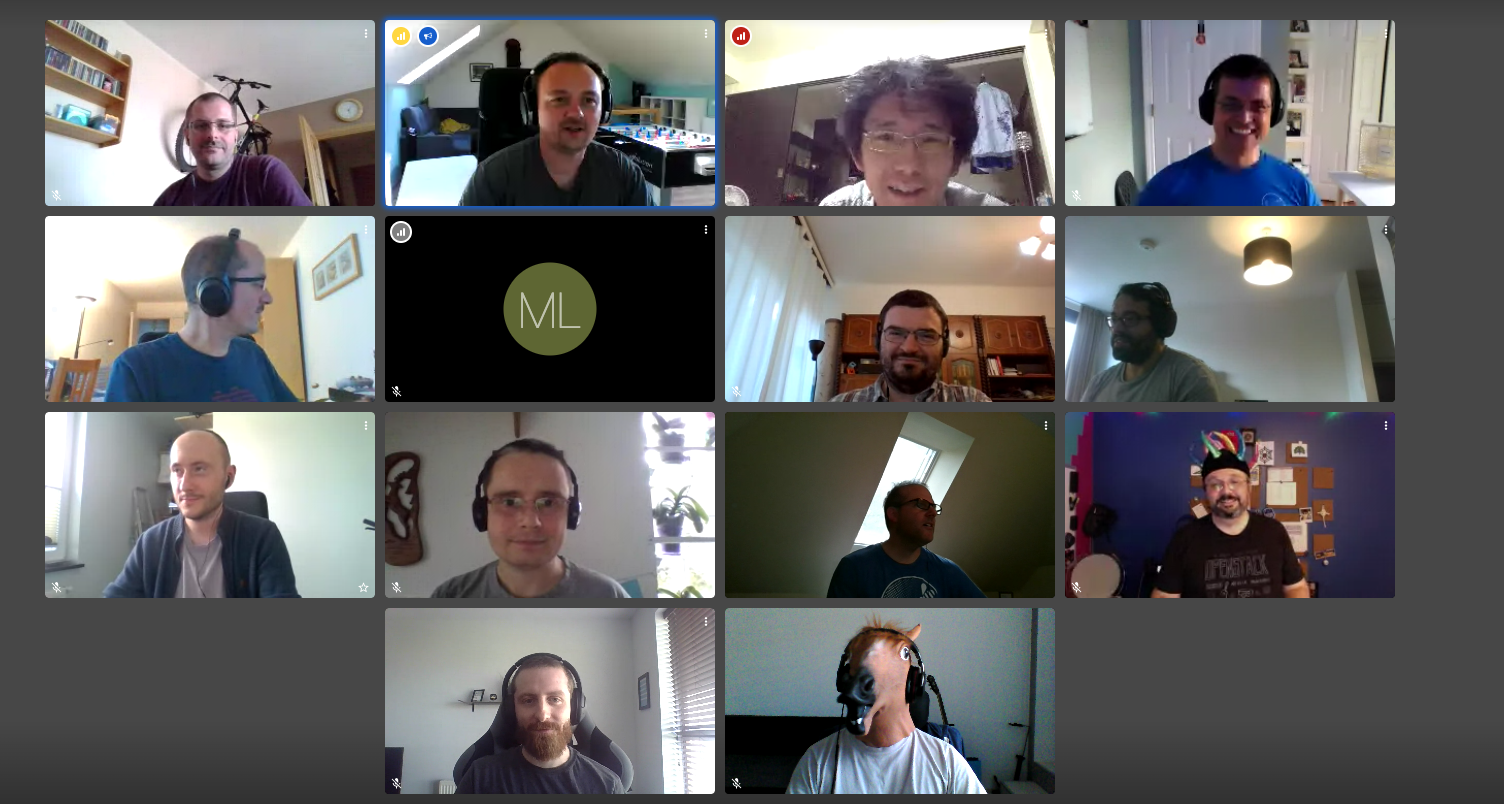 Credits for photos comes to Rodolfo and Jakub who made them :) Thx a lot!