Yet another virtual PTG happened between 26th and 30th of October. Neutron team had sessions in each day of the PTG. Below is summary of what we discussed and agreed during that time. Etherpad with notes from the discussions can be found at OpenDev Etherpad.

Retrospective of the Victoria cycle

From the good things during Victoria cycle team pointed:

From the not so good things we mentioned:

During that session we also agreed on some action items for the Wallaby cycle:

Review of the existing meetings

We reviewed list of our existing upstream meetings and discussed about ideas on how to increase number of attendees on the meetings. We decided to:

Bernard started discussion about support for the old releases in Neutron and Neutron stadium projects. For Neutron we decided to mark Ocata branch as unmaintained already as its gate is already broken. For the Pike and never branches we will keep them in the EM phase as there is still some community interest to keep those branches open. For the stadium projects we decided to do it similary to what we did while looking for new maintainers for the projects. We will send email “call for maintainers” for such stable branches. If there will be no voluneers to step in, fix gate issues and keep those branches healthy, we will mark them as unmaintained and later as End of Life (EOL). Currently broken CI is in projects:

And those are candidates to be marked as unmaintained if there will be no volunteers to fix them. Bernard Cafarelli volunteered to work on that in next days/weeks.

We discussed as our healtcheck API should works. During the discussion we decided that:

Squash of the DB migration script

Rodolfo explained us what are benefits of doing such squash of the db migration scripts from the old versions:

The problem with this may be that we need to do that carefully and be really verbose about with such changes we may break stadium projects or 3rd party projects which are doing db migration too. To minimalize potential breakage, we will announce such changes on the OpenStack discuss mailing list. Rodolfo volunteered to take propose squash up to Liberty release in W cycle. Together with this squash we will also document that process so in next cycles we should be able to do squashes for newer releases in easier way. Lajos volunteered to help with fixing Neutron stadium projects if that will be needed.

Switch to the new engine facade

We were discussing how to move on and finally finish old Blueprint. We decided that together with Rodolfo we will try how this new engine facade will work without using transaction guards in the code. Hopefully that will let us move on with this. If not, we will try to reach out to some DB experts for some help with this.

This is now community goal during the Wallaby cycle so we need to focus on it to accomplish that transition finally. This transition may speed up and make our code a bit more secure. Rodolfo explained us multiple possible strategies of migration:

To move on with this I will create list of the pieces of code which needs to be transitioned in the Neutron repo and in the stadium projects. Current todo items can be found on the StoryBoard.

Migration to the NFtables

During this session we were discussing potential strategies on how to migrate from the old iptables to the new nftables. We need to start planning that work as it major Linux distributions (e.g. RHEL) are planning to deprecate iptables in next releases. It seems that currently all major distros (Ubuntu, Centos, OpenSuSE) supports nftables already. We decided that in Wallaby cycle we will propose new Manager class and we will add some config option which will allow people to test new solution. In next cycles we will continue work on it to make it stable and to make upgrade and migration path for users as easy as possible. There is already created blueprint to track progress on that topic. We need to migrate:

We had very interesting discussion with Nova team. We were discussing topics like:

Notes from that discussion are available in the nova’s etherpad.

On Thursday we were discussing how to improve our very poor CI. Finally we decided to:

Later we also discussed about the way how to run or skip tests which can be only run when some specific feature is available in the cloud (e.g. Metadata over IPv6). After some discussion we decided to add new config option with list of enabled features. It will be very similar to the existing option api_extensions. Lajos volunteered to work on that.

As last CI related topic we discussed about testing DVR in our CI. Oleg Bondarev volunteered to check and try to fix broken neutron-tempest-plugin-dvr-multinode-scenario job.

Liu Yulong raised topic about new way of doing fully distributed DHCP service, instead of using DHCP agent on the nodes - proposed RFE is proposed. His proposal of doing OpenFlow based DHCP (similar to what e.g. ovn-controller is doing) is described in slides. It could be implemented as an L2 agent extension and enabled by operators in the config when they would need it. As a next step Liu will now propose spec with details about this solution and we will continue discussion about it in the spec’s review.

As a lost topic on Thursday we briefly talked about old RFE. Miguel Lavalle told us that his company, Verizon Media, is interested in working on this RFE in next cycles. This also involves some work on Nova’s side which was started by Sylvain Bauza already. Miguel will sync with Sylvain on that RFE.

On Friday we were discussing some potential improvements in the L3 area. Lajos and Bence shown us some features which their company is interested in and on which they plan to work. Those are things like:

As a last topic on Friday we were discussing potential solutions of the L3 on the host in the Neutron. The idea here is very similar to what e.g. Calico plugin is doing currently. More details about potential solutions are described in the etherpad. During the discussion Dawid Deja from OVH told us that OVH is also using very similar, downstream only solution. Conclusion of that discussion was that we may have most of the needed code already in Neutron and some stadium projects so as a first step people who are interested in that topic, like Jan Gutter, Miguel and Dawid will work on some deployment guide for such use case.

During the PTG we also made team photos. 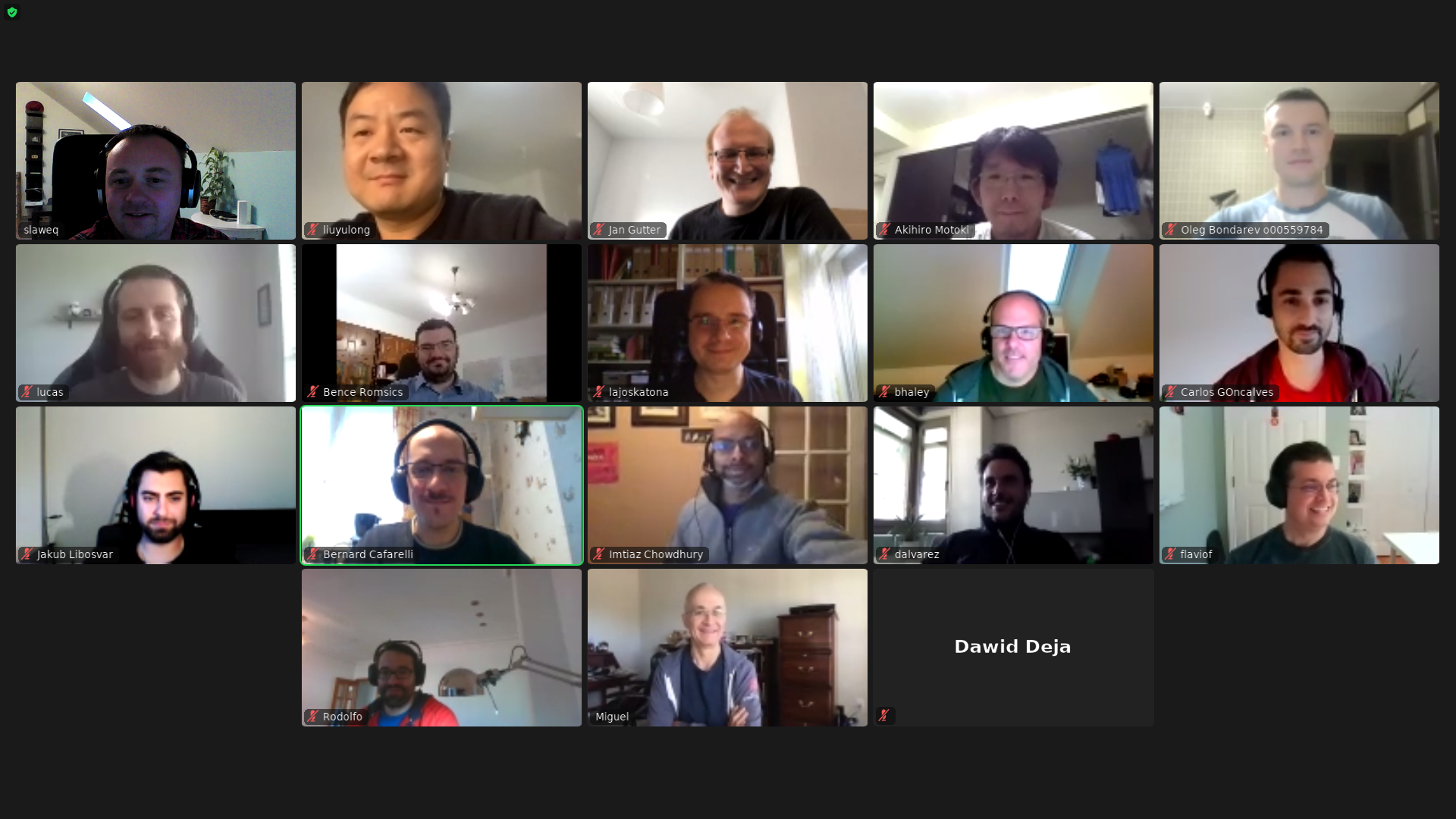 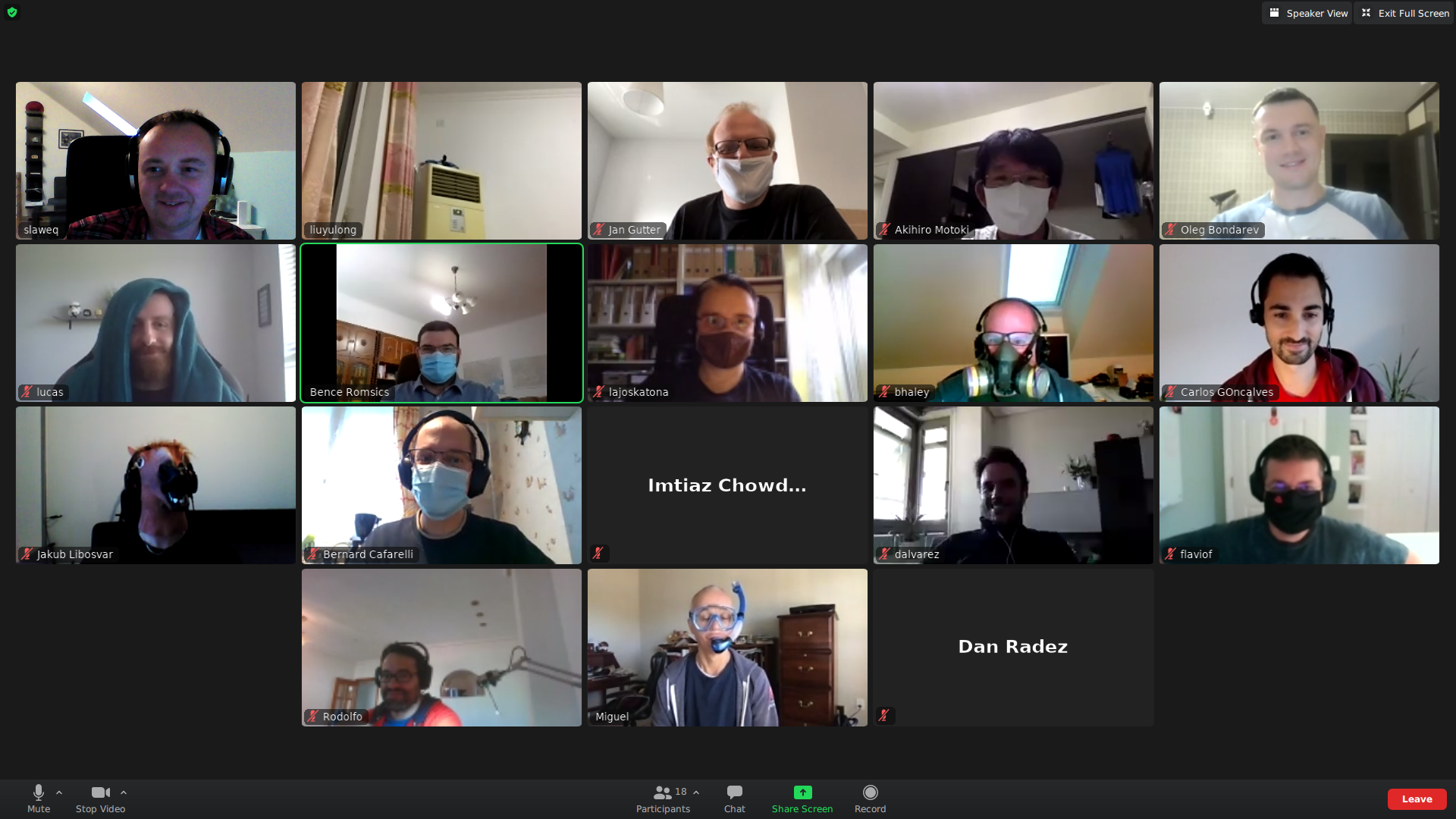 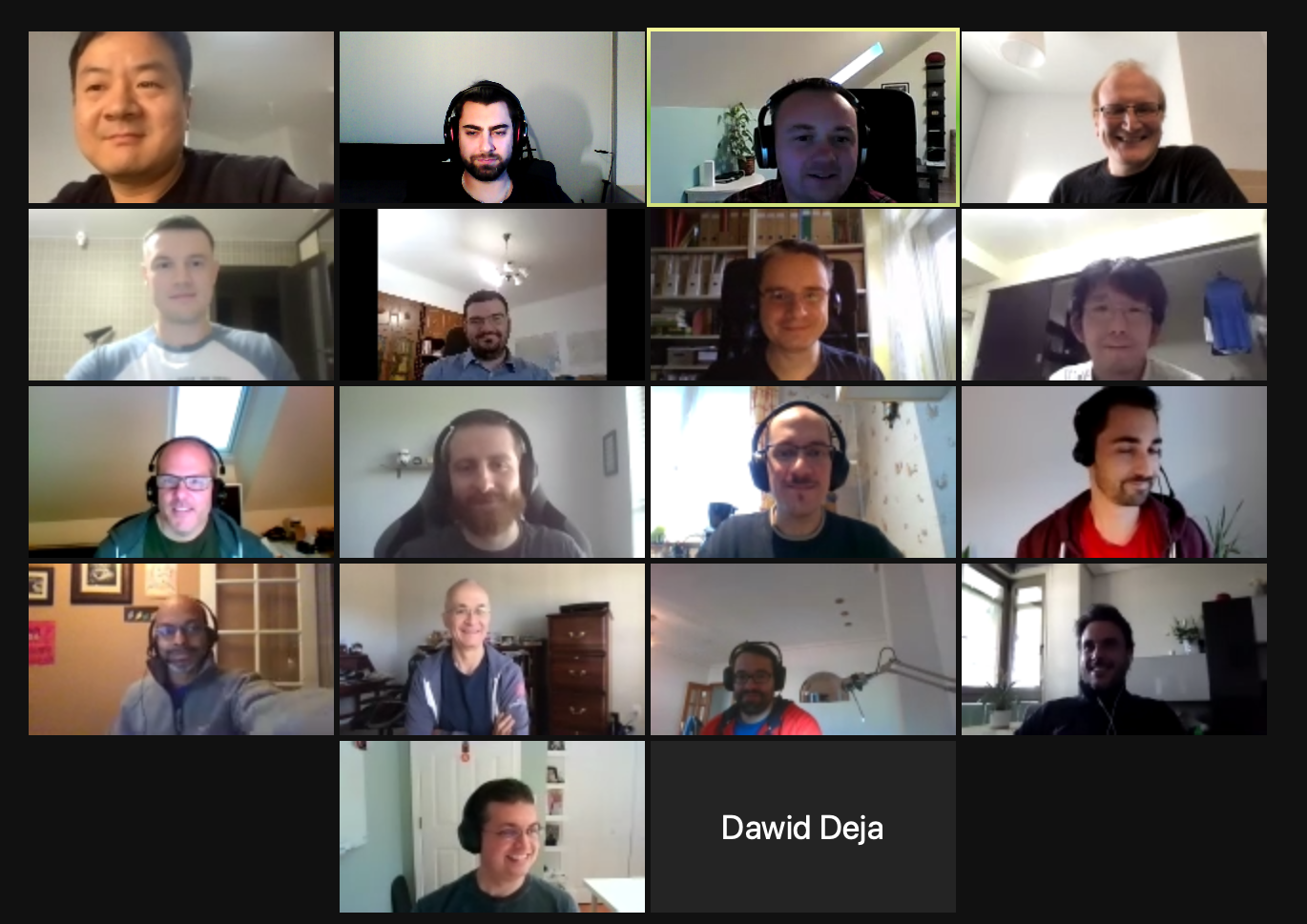 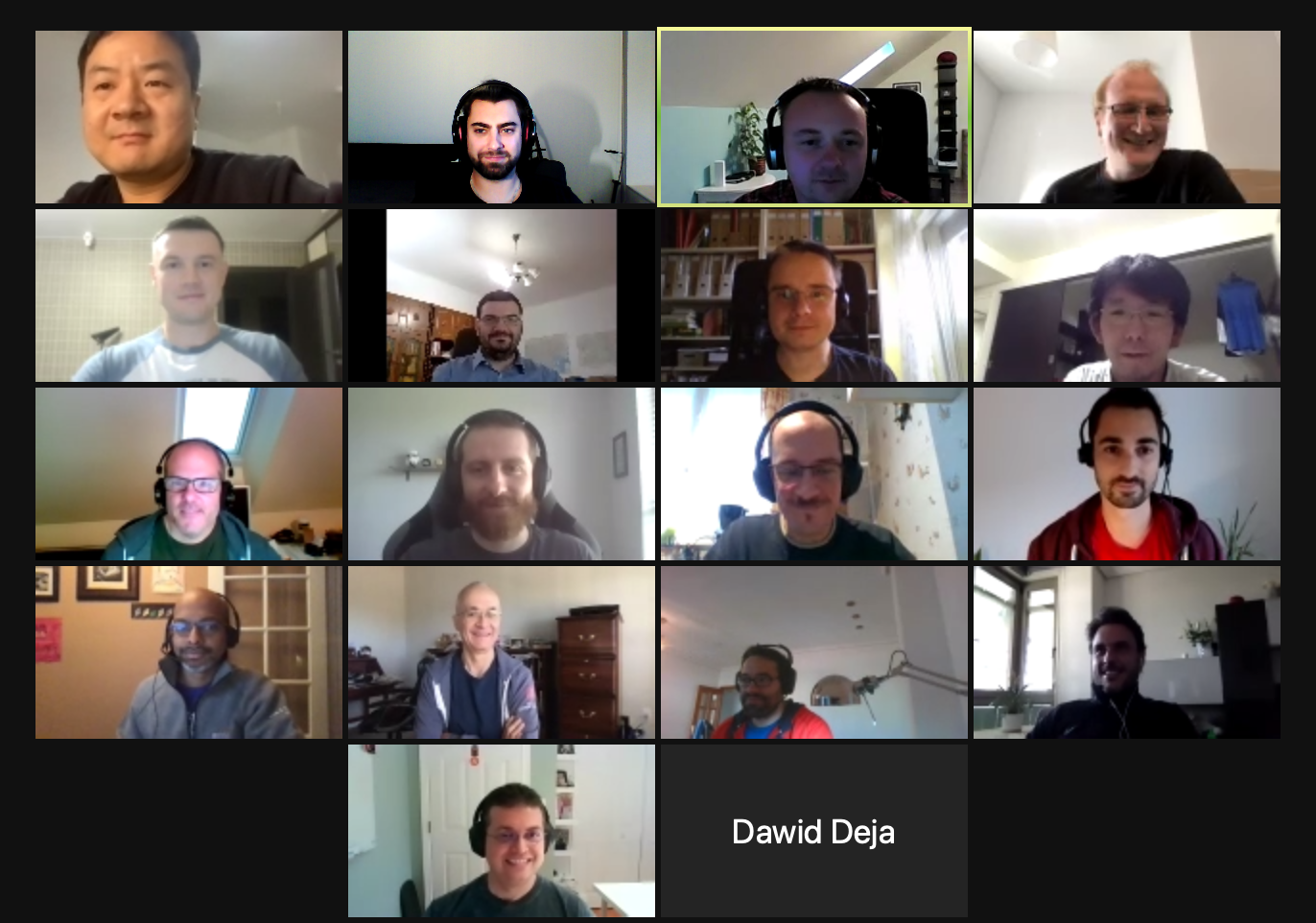 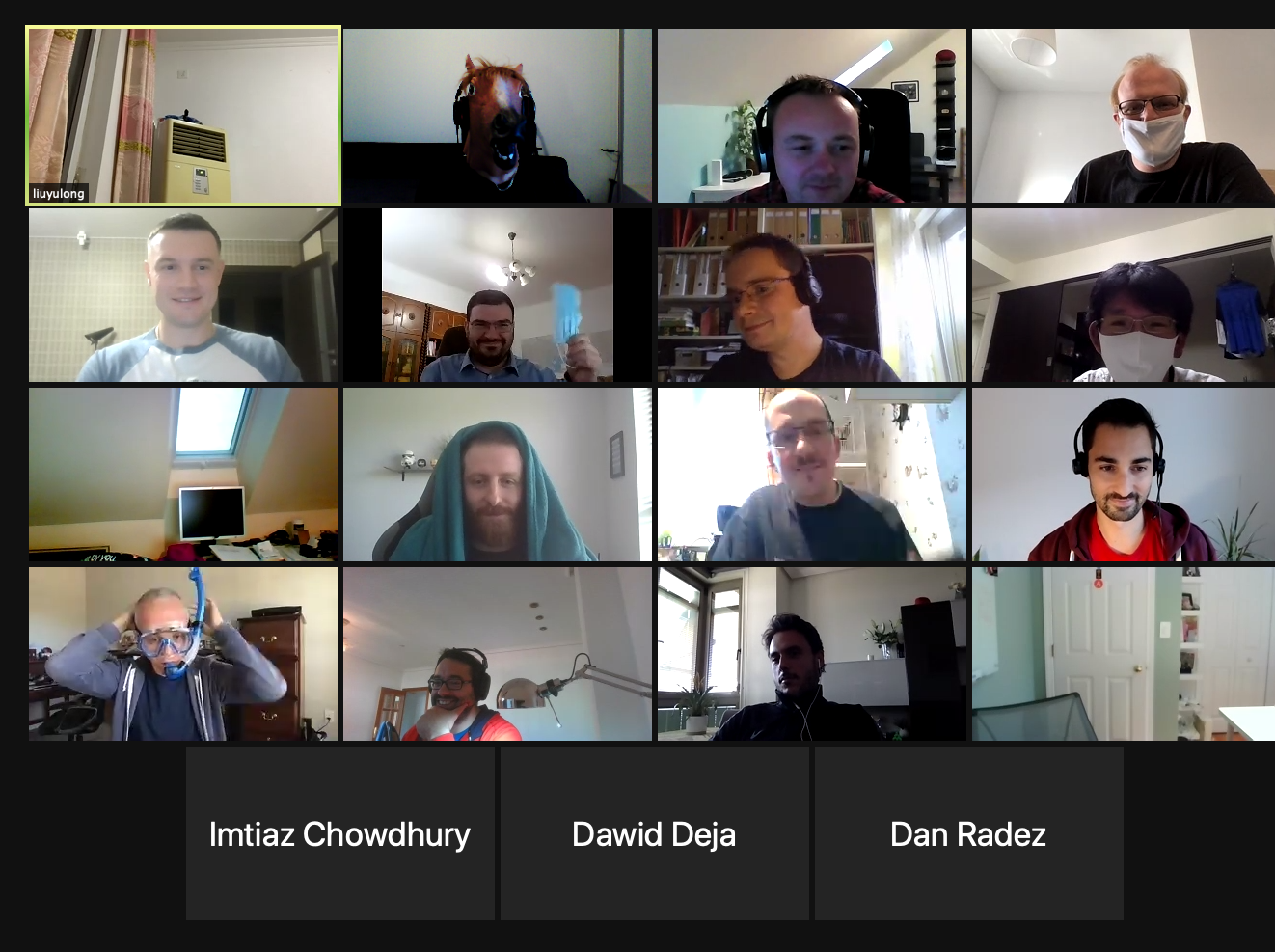 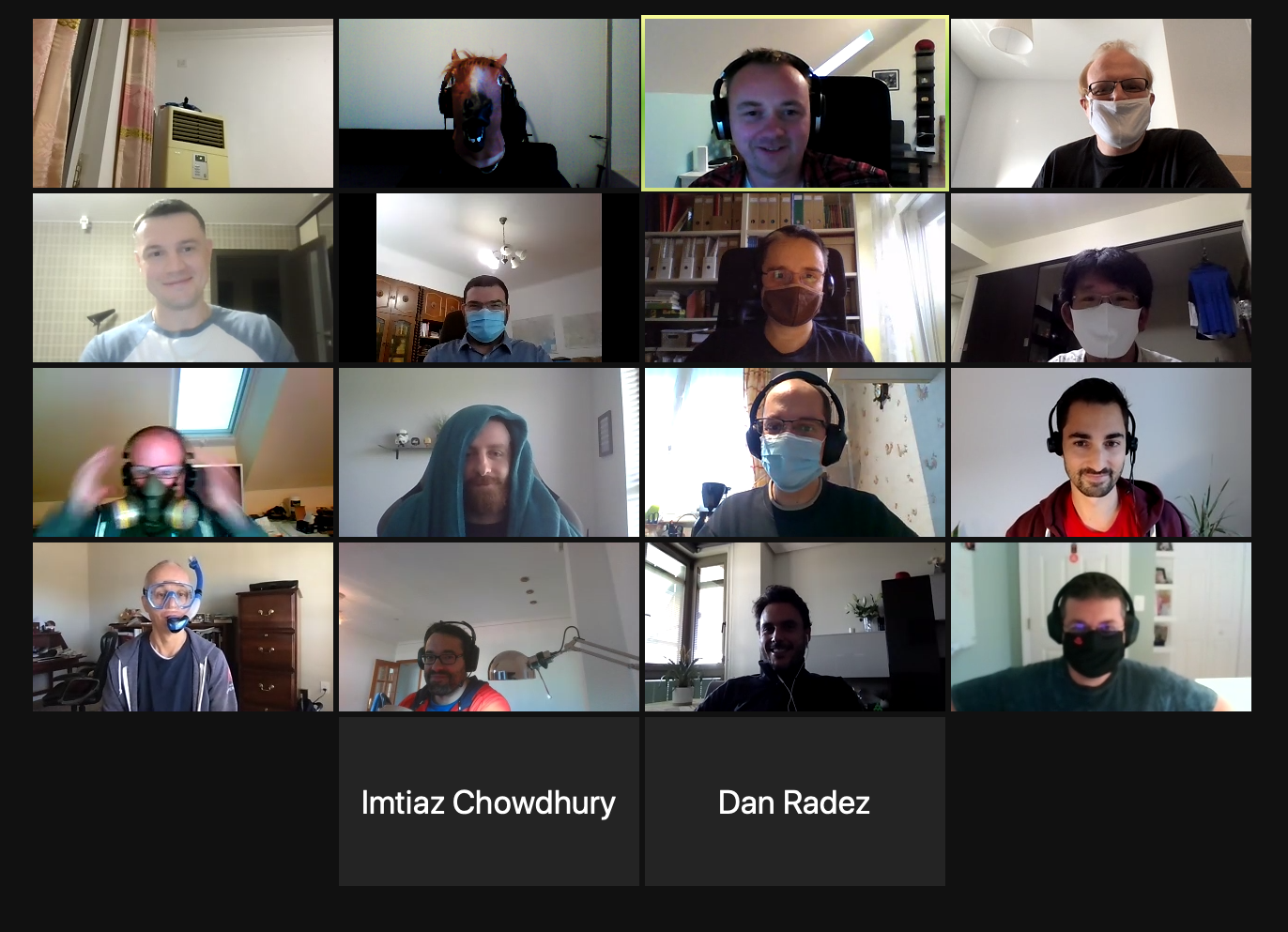 In overall it was another great and very productive PTG. Of course I missed a lot all in person meetings, talks during the lunch or coffee breaks and most Neutron team dinner but currently it was all what we can do. I hope that next year we will be able to meet in person finally. Take care of Yourself and see You online :)